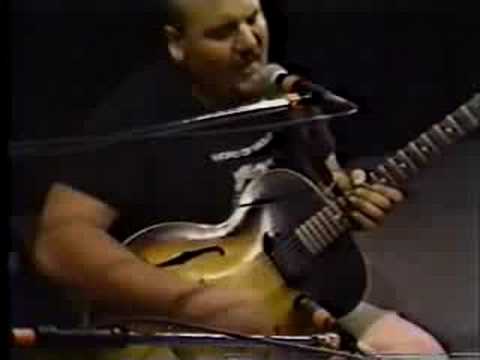 Great acoustic version from the masters, circa 1985. Via Verbicide One listen to the Lords sophomore album and it's hard to believe that buried under the weight of scuzz soaked riffs, dirty blues arrangements and howling vocals lie three lads from Nottingham. Sounding a lot more like a bunch of unwashed Thin Lizzy fans, with Everyone Is People Lords deliver an effective if not familiar mix of the afore mentioned Thin Lizzy, the slinky grooves of ZZ Top, the trippy might of Hendrix and some early Soundgarden thrown in to really pad it out. But as helpful as reviews are that name check a multitude of sound-a-likes Lords bring enough of their own muscle to this album to make it a lot more than just a sum of its parts.

Their 2006 debut album, It Aint A Hate Thing, It's A Love Thing, was something of a side project for the 3 band members who were all in other groups but since then Lords have grown into the gravitas of their name and have come back with a sound that expands on the blues-rock success of bands like The Black Keys by dousing it with an obvious love of DC hardcore ferocity and the expanse of 70's rock. The Things We Do For Money is the flagship tune here and does everything you'd want an album like this to do. Treating the funk of The Meters to dirty, driving guitars, it holds a good amount of tension before dropping into the rhythm with amazing satisfaction.

Much of the album does follow this lead, with simmering formless arrangements introducing most songs until, with an imaginary nod of the head, all the band members fall into line and the riffage begins. But instead of being predictable this structure gives the songs the feel of a free jazz jam. It's not all high octane riff-offs either with tight-lipped shufflers like The Boat Don't Float shifting down a gear and building tension and the violins and cello's on opener Good Dog Bad Dog providing the mix with subtle texture and unexpected warmth. Everyone Is People wont change your life but it will certainly make it that much more entertaining. Of late it seems that any music that has really caught my imagination and got me all excited (in the way that only good new music can) has tended to have been shipped across from America or Canada. Seemingly most of the new British Made bands rising to the top seem to follow the same unremarkable formula. However, happen as it gives me great pleasure to say that this sterling album from Soe’za has only been and gone and been made by a large bunch of fertile minded people from the South West of England.

Judging by their stats the band get two thumbs up from me: 7 or 8 people (since seeing Broken Social Scene live again I’m convinced that more is more), two drummers (name me a bad band who has two drummers), a pleasant blend of his’n’her vocals (harmonious), a cello (hello), the usual bass and guitars (check), and – best of all – a French Horn that rounds the sound marvellously (nice brass).

The album has a vital and urgent intensity throughout (shown best on ‘Don’t Bother Coming Home’) which is nicely balanced by a couple of warming instrumentals with the French Horn taking centre stage. They’ve been compared to Fugazi and Deerhoof, but if that means nothing to you then what you’re looking at / listening to is, simply put, your Alternative-Art-Rock-Improv-Noisy-Punk-Indie-Post-Hardcore genre. Which sounds a lot better than it reads.

Now then, I’ll admit that I don’t always pay close attention to lyrics (I can easily like a great tune with poor lyrics, but great lyrics over a rubbish tune might well pass me by), but some of the pleasantly odd rants and rambles did stand out here. Such as on ‘Any Road’: “Peering through the glass / there is an old dear / scrutinising the cream cakes / how long will they last?”. Sadly they never reveal the sell by date, but happily there are several more moments of bizarre lyrics which, with the occasional hint of that West Country lilt, they ably pull it off where others might not.

7 Obstacles confirms that brass is underrated and underused and that there are some really interesting British bands out there drawing up their own musical blueprints. All told, happen as I think this album is tip-top and one of the most interesting I’ve heard for some time. In a music scene overrun with convoluted titles such You Say Clap Your Hands We Say Yeah Yeah Yeah's (is that right?) it's a joy to review this album called A Hat. It would be such a shame if it's brief title was the only reason this record was a joy to review and thankfully it isn't. Following on from their 2005 album I Felt Nothing At All, A Hat is a smoldering powerhouse of instrumental muscle very much in the same vein as Tortoise or Explosions In The Sky but has a healthy spattering of Battles as well.

As if making up or the album's title these songs are anything but brief. Not counting the first intro the shortest song here is over eight minutes and the other 3 are all around the 14 minute mark and for a band that produce uber serious, post-rock marathons they lighten the load with their titles. The second track builds on airy, spacious melodies but gets progressively louder and harder until it finally bears its teeth in pounding guitars and drums, would you believe it's called Quit Touching My Ass?

Hand or Finger? is less sprawling and is more immediately accessible both in its length and spiky guitars and pounding drums. The album finishes on a long-haul of swelling guitars and wave upon wave of crashing symbols that suddenly drops away in place of a home straight of funky bass lines and delicate electronics, and all this under the title The Young Ted Danson.

Each song plays like a soundtrack to its own movie. They change tempo repeatedly, sometimes taking their time and sometimes giving out no warning at all. A strange sense of narrative drifts through them that really holds your attention. This way they maintain the lyrical structure but stay purely instrumental.

Souvaris have a healthy mix going on here. In formal terms they fit perfectly with their post-rock counterparts but with playfulness and a clever ear for the pop hook they manage to pull themselves out of the self-indulgent fog that often lingers for too long in this genre. There is a refreshing sense of irony about this album that if it were a person would be fun to hang around with but would also be capable of great depth. They'd back you up in a fight but could quite easily have caused it in the first place.