The House That Dirt Built

There's an air of disappointment in the Pilton household surrounding this release. Last Year's debut album from The Heavy delivered a couple of tracks which I could not shake from my head - and the blend of rock riffs, funk loops and soulful vocals really worked. This follow up starts out well, but doesn't have the consistency of the previous release.

Opening up with two pretty strong tracks - Oh No! Not You Again easily lives up to the debut's promise, and that's tailed closely by How You Like Me Now, which also packs a mean punch. Now, I usually count diversity as a plus point when bands stretch out into other territories, but in the case of The Heavy, I think this may be what lets them down. Sixteen is a well produced song - a waltz in the haunted carnival or cabaret style - but it sits uncomfortably alongside the riffs and the soul. Short Change Hero and Long Way From Home have the right ingredients but come out sounding kind of corny - but the worst offender has to be the aptly named Cause For Alarm. This is a truly horrible track - Cod Reggae produced by someone whose skills lie in other areas. Really, it's a toe-curler, and not a million miles away from Dreadlock Holiday by 10cc. Why lads? Whose idea was this?

After that, I couldn't get back into the record - even the sweet riffing of What You Want Me To Do couldn't take away the dreadful taste left by Cause For Alarm. Overall then, the album is about 50 percent good, and 50 percent other than good, which is not as consistent as last year's release. Shame. I really wanted this one to be better, and was willing each track to be a good'un as I played it through. Let's hope they can nail it down for a third album.

I didn't read up on this band before I listened to the album - but I knew it was going to be a kind of post-rock instrumental album released through Ninja Tune subsidiary Counter Records. If that conjures some kind of aural image in your mind's-ear, you can be pretty sure that's what Cougar sound like. You could put them on the same lineup as Tortoise without upsetting anyone, and the production on the record is lightly peppered with some of those super-slick Ninja Tune flicks and flares. What's weird about this record is that it exchanges post-rock's jazz leanings for more of a world music or folk texture, and this doesn't always hit the spot. The other thing is that it has many tasty ingredients such as beefy sound, great playing, dynamics and variation - but they combine into a dinner that is served in a somewhat over-polite manner. Even the parts where the guitars crank up and it goes all metal just seem a bit too reserved, a bit too clean. The drumming is outstanding throughout, while final track Absaroka is the understated shining gem of the whole collection - since it taps into an American folk sound that is more typically played by Bill Frisell.

This track stands up easily alongside fellow Ninjas Jaga Jazzist, but much of the remaining album suffers from over-bake. Ninja are good at coaxing terrific second albums out of their artists, so Cougar could be a band to keep an eye on.

For a number of quite obvious reasons, it’s not very often that I compare myself to Arnold ‘The Governator’ Schwarzenegger, nor for that matter Hulk ‘The Hulk’ Hogan or perhaps for younger readers Dwayne ‘The Rock’ Johnson. However, listening to the debut album ‘Worldwide’ by the much travelled The Death Set, got me thinking of the pumped-up trio of Strongmen-turned-actors - more specifically the fish-out-of-water genre of films that each turned their not inconsiderable hand to. I’m thinking Arnie’s Kindergarten Cop, the Hulk’s Mr Nanny and The Rock’s recent fodder Game Plan, each of which feature our macho and mature heroes lost and cut adrift in a world of small children and high energy.

I’ll make no claim to macho, but am inevitably maturing and on first listen found Worldwide a disorientating experience, like finding yourself in a classroom of screaming kids and an empty crate of red bull. Making the Go Team sound middle of the road - it’s hard to stomach in one sitting. 18 songs in 26 minutes gives you an idea of the frenetic pace and energy of the album.

The band were spawned in Australia, temporarily based themselves in Brooklyn before settling in Baltimore, attracted by the city’s abandoned factories and their potential for holding kick-ass parties, and it’s seeing footage and photos of those kick-ass parties (ie Live shows) that help paint a bigger picture as to what The Death Set are all about. It’s a raucous affair, with the band placing themselves out on the floor, amongst the fans, with no shortage of blood, sweat and beer. They bring to mind the photos of Glen E. Friedman, who documented the US Hardcore scene of the early 80's – whereas punk back then was played at breakneck speed and driven by anger, The Death Set play at breakneck speed, but seem to be angry at anger, naming as they do, comedy and positivity as major influences.

I regard a bunch of those Hardcore bands as early personal favourites (Minor Threat, Circle Jerks, Black Flag). but there is no way I could maintain that pace and energy and inyourfacefuckyouness as the years pass. So, The Death Set, whilst cajoling a bit of nostalgia, aren’t going to be on heavy rotation in chimpovich palace, which of course is my problem and not theirs. Whilst they’re burning down the scene and hosting kick-ass parties, I’ll be lamely heading to the gym, trying to transform this gut into something nowhere near approaching Hulk, Rock and Arnie proportions.

It's not just great TV coming out of Baltimore these days. The city's raised profile seems to have given birth to a rising music scene - hopefully keeping the kids off the streets of Hamsterdam. Ninja Tune's own Counter Records label have harnessed the power and signed electrifying band The Death Set.

Turning their backs on the traditional stage, the band set up in the dancefloor to kick out their brand of frantic disco punk ....like a post-rave Minor Threat. Check out You Tube for some surveillance, or check them out live when they play Bardens in Dalston on February 15th.

They have a four track single - MFDS - out February 11th and a whopping 18 track album (which clocks in at 26 minutes, Ian Mackaye would be proud) out in April. 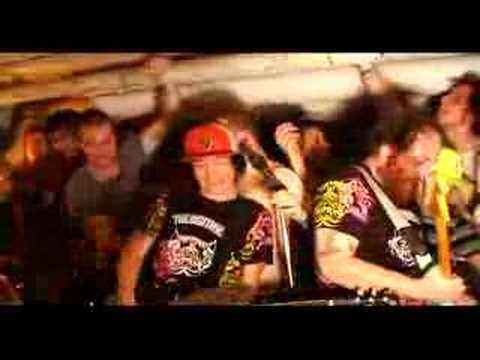 Ninja Tune have always been a label full of surprises. It has stretched and flexed to accomodate the ever increasing and varied tastes of its creators, but with Pop Levi they seem to have met their match. So they created a spin-off label just for him and give us the debut offering The Return To Form Black Magick Party. Only an artist of shameless arrogance could describe their debut as a return to form - and that's exactly what we have here. Born in London, Pop laid his early musical roots in Liverpool then moved to LA in pursuit of the 'magick' that he sees at the very heart of great music. Making up one third of free-thinking, post rock trio and fellow Ninja's Super Numeri, then playing bass for Ladytron Pop decided to go it alone and released his first EP "Blue Honey" on Counter Records in September last year. Then hot on its heals he gives us this. Mark Bolan is an instant point of recognition in Pop's sound but throughout this album we see glimpses of Prince, Dylan, Hendrix and even Jack White. But as with all quality music these influences, don't in any way confuse the sound that Pop has crafted for himself. That sound isn't easily explained as it keeps on changing. There's a very hand crafted feel to it with layers of acoustic and electric guitars punctuating washes of percussion, but this all often fed through some sort of machine and the Pop Levi sound is churned out the other side.

From the opening single, 'Sugar Assault Me Now,' it's quite clear that this is the doorway to a world far removed from our own. A world of astral energy where reality and disbelief are suspended and anything is possible. The first two tracks get things started at break-neck speed with a cacophony of stabbing guitars, fuzzy bass and more than enough hand claps. Things are taken down a notch with '(A Style Called) Cryin' Chic' with its folk blues meanderings over textured percussion. 'Skip Ghetto' shows Pop's sensitive side with a beautiful dreamy, acoustic little number only to be bitch slapped once again by the most Bolan of songs 'Dollar Bill Rock'.

The whole album follows this up and down formation, painting a very rich picture of this mans talents. It's contemplative and at the same time immensely uplifting. It's relaxing and floaty then foot tappingly addictive. It can appear to be conforming to every current fashion then rejecting it all in an instant. 'The Return To Form's' listening experience is just as up and down. On the first few plays it is thrilling and refreshing but I have to admit that the constant use of repetition in the lyrics does give it an air of emptiness. But hey it's pop music and not every moment has to move you to tears. There are plenty of moving moments here but most of them are on a level totally their own. The album makes you move and it makes you want to tell people about it. It oozes so much arrogance and confidence that it can only have been conceived by an artist with a very unique outlook on making music. It was a wise move for Ninja Tune to create an environment for this man to shine - as he has a lot to say and if this debut is anything to go by he has a myriad of ways to say it.